The Fifth Sorrowful Mystery - the Crucifixion of Jesus – from the Gospel according to Luke, chapter 23, verses 32-49.

Now two others, both criminals, were led away with him to be executed. When they came to the place called the Skull, they crucified him and the criminals there, one on his right, the other on his left. [Then Jesus said, "Father, forgive them, they know not what they do."] They divided his garments by casting lots. The people stood by and watched; the rulers, meanwhile, sneered at him and said, "He saved others, let him save himself if he is the chosen one, the Messiah of God." Even the soldiers jeered at him. As they approached to offer him wine they called out, "If you are King of the Jews, save yourself." Above him there was an inscription that read, "This is the King of the Jews." Now one of the criminals hanging there reviled Jesus, saying, "Are you not the Messiah? Save yourself and us." The other, however, rebuking him, said in reply, "Have you no fear of God, for you are subject to the same condemnation? And indeed, we have been condemned justly, for the sentence we received corresponds to our crimes, but this man has done nothing criminal." Then he said, "Jesus, remember me when you come into your kingdom." He replied to him, "Amen, I say to you, today you will be with me in Paradise." It was now about noon and darkness came over the whole land until three in the afternoon because of an eclipse of the sun. Then the veil of the temple was torn down the middle. Jesus cried out in a loud voice, "Father, into your hands I commend my spirit"; and when he had said this he breathed his last. The centurion who witnessed what had happened glorified God and said, "This man was innocent beyond doubt." When all the people who had gathered for this spectacle saw what had happened, they returned home beating their breasts; but all his acquaintances stood at a distance, including the women who had followed him from Galilee and saw these events.


While meditating on the Mystery of the Crucifixion of Jesus, pray also for the release of its fruit, perseverence.

“'Christ died for our sins in accordance with the scriptures' (1 Corinthians 15:3)". (Article 619 of the Catechism of the Catholic Church) 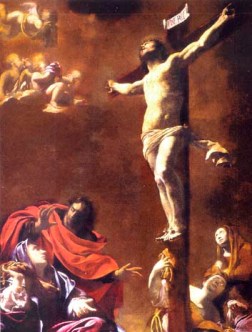 
This concludes the Fifth Sorrowful Mystery. Click here to continue with the closing prayers of the Rosary.