How the Battle of Lepanto gave rise to a Holy Rosary Feast Day. 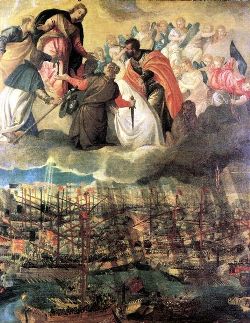 &nbspThe website Catholic.com features
an excellent article from the
Catholic magazine This Rock,
about the 1571 Battle of Lepanto,
which gave rise to the Church's
Holy Rosary Feast Day, Our Lady
of the Rosary, which we still
celebrate!

Author Christopher Check begins
"Americans know that in 1492
Christopher Columbus "sailed the
ocean blue," but how many know
that in the same year the heroic
Catholic monarchs Ferdinand and
Isabella conquered the Moors in
Grenada? Americans would also
probably recognize 1588 as the year
of the defeat of the Spanish Armada
by Francis Drake and the rest of
Queen Elizabeth’s pirates. It was a
"The Battle of Lepanto"                    &nbsptragedy for the Catholic kingdom of
by Paolo Veronese (1528-1588)          Spain, and a triumph for the
Protestant British empire, and the defeat determined the kind of history that would one day be taught in American schools: Protestant British history.

As a result, 1571, the year of the battle of Lepanto, the most important naval contest in human history, is not well known to Americans. October 7, the Feast of Our Lady of the Rosary, celebrates the victory at Lepanto, the battle that saved the Christian West from defeat at the hands of the Ottoman Turks.

That this military triumph is also a Marian feast underscores our image of the Blessed Virgin prefigured in the Canticle of Canticles: "Who is she that cometh forth as the morning rising, fair as the moon, bright as the sun, terrible as an army set in array?"
...
In a papacy of great achievements, the greatest came on March 7, 1571, on the feast of his fellow Dominican, St. Thomas Aquinas. At the Dominican Church of Santa Maria Sopra Minerva in Rome, Pope Pius formed the Holy League. Genoa, the Papal States, and the Kingdom of Spain put aside their jealousies and pledged to assemble a fleet capable of confronting the sultan’s war galleys before the east coast of Italy became the next front in the war between the Christianity and Islam.
...
The man chosen by Pius V to serve as Captain General of the Holy League did not falter: Don John of Austria, the illegitimate son of the late Holy Roman Emperor, Charles V, and half-brother of Philip II, King of Spain...He was a great horseman, a great swordsman, and a great dancer. With charm, wit, and good looks in abundance, he was popular among the ladies of court. Since childhood he had cultivated a deep devotion to the Blessed Virgin...He was twenty-four years old.
...
Don John took charge of his fleet and promptly forbade women from coming aboard the galleys. He declared that blasphemy among the crews would be punishable by death. The whole fleet followed his example and made a three-day fast.

By September 28, the Holy League had made its way across the Adriatic Sea and was anchored between the west coast of Greece and the Island of Corfu. By this time, news of the death of Bragadino had reached the Holy League, and the Venetians were determined to settle the score. Don John reminded his fleet that the battle they would soon engage in was as much spiritual as physical.

Pius V had granted a plenary indulgence to the soldiers and crews of the Holy League. Priests of the great orders, Franciscans, Capuchins, Dominicans, Theatines, and Jesuits, were stationed on the decks of the Holy League’s galleys, offering Mass and hearing confessions. Many of the men who rowed the Christian galleys were criminals. Don John ordered them all unchained, and he issued them each a weapon, promising them their freedom if they fought bravely. He then gave every man in his fleet a weapon more powerful than anything the Turks could muster: a Rosary.

On the eve of battle, the men of the Holy League prepared their souls by falling to their knees on the decks of their galleys and praying the Rosary. Back in Rome, and up and down the Italian Peninsula, at the behest of Pius V, the churches were filled with the faithful telling their beads. In Heaven, the Blessed Mother, her Immaculate Heart aflame, was listening. ...
It was. At dawn on October 7, 1571, the Holy League rowed down the west coast of Greece and turned east into the Gulf of Patras. When the morning mist cleared, the Christians, rowing directly against the wind, saw the squadrons of the larger Ottoman fleet arrayed like a crescent from shore to shore, bearing down on them under full sail.

As the fleets grew closer, the Christians could hear the gongs and cymbals, drums and cries of the Turks. The men of the Holy League quietly pulled at their oars, the soldiers stood on the decks in silent prayer. Priests holding large crucifixes marched up and down the decks exhorting the men to be brave and hearing final confessions.

Then the Blessed Virgin intervened.

The wind shifted 180 degrees. The sails of the Holy League were filled with the Divine breath, driving them into battle. Now heading directly into the wind, the Turks were forced to strike their sails. The tens of thousands of Christian galley slaves who rowed the Turkish vessels felt the sharp sting of the lash summoning them up from under their benches and demanding they take hold of their oars and pull against the wind.

Don John knelt on the prow of Real and said a final prayer. Then he stood and gave the order for the Holy League’s battle standard, a gift from Pius V, to be unfurled. Christians up and down the battle line cheered as they saw the giant blue banner bearing an image of our crucified Lord.

The fleets engaged at midday.
...
The fighting lasted for five hours. The sides were evenly matched and well led, but the Divine favored the Christians, and once the battle turned in their favor it became a rout. All but thirteen of the nearly 300 Turkish vessels were captured or sunk and over 30,000 Turks were slain. Not until the First World War would the world again witness such carnage in a single day’s fighting. In the aftermath of the battle, the Christians gave no quarter, making sure to kill the helmsmen, galley captains, archers, and Janissaries. The sultan could rebuild ships, but without these men, it would be years before he would be able to use them.

The news of the victory made its way back to Rome, but the Pope was already rejoicing. On the day of the battle, Pius had been consulting with his cardinals at the Dominican Basilica of Santa Sabina on the Aventine Hill. He paused in the midst of their deliberations to look out the window. Up in the sky, the Blessed Mother favored him with a vision of the victory. Turning to his cardinals he said, "Let us set aside business and fall on our knees in thanksgiving to God, for he has given our fleet a great victory."