The spiritual FRUIT of praying the Fourth Joyful Mystery is OBEDIENCE.

An audio-video presentation of the Visitation
appears at the end of this page.

A Scriptural Rosary version for this
decade is available here.
(Page can take a moment to load, and
text may appear further down page!)


The Presentation in Scripture – Luke chapter 2, from verse 22:
"When eight days were completed for His circumcision, He was named Jesus, the name given Him by the angel before He was conceived in the womb. When the [40] days were completed for their [Mary and Jesus'] purification according to the law of Moses, they [Joseph and Mary] took Him up to Jerusalem to present him to the Lord, just as it is written in the law of the Lord, "Every male that opens the womb shall be consecrated to the Lord," and to offer the sacrifice of "a pair of turtledoves or two young pigeons," in accordance with the dictate in the law of the Lord. Now there was a man in Jerusalem whose name was Simeon. This man was righteous and devout, awaiting the consolation of Israel, and the Holy Spirit was upon him. It had been revealed to him by the Holy Spirit that he should not see death before he had seen the Messiah of the Lord. He came in the Spirit into the temple; and when the parents brought in the Child Jesus to perform the custom of the law in regard to Him, he took Him into his arms and blessed God, saying: "Now, Master, You may let Your servant go in peace, according to Your word, for my eyes have seen Your salvation, which You prepared in sight of all the peoples, a light for revelation to the Gentiles, and glory for Your people Israel." The Child's father and mother were amazed at what was said about Him; and Simeon blessed them and said to Mary His mother, "Behold, this Child is destined for the fall and rise of many in Israel, and to be a sign that will be contradicted (and you yourself a sword will pierce), so that the thoughts of many hearts may be revealed." There was also a prophetess, Anna, the daughter of Phanuel, of the tribe of Asher. She was advanced in years, having lived seven years with her husband after her marriage, and then as a widow until she was eighty-four. She never left the temple, but worshiped night and day with fasting and prayer. And coming forward at that very time, she gave thanks to God and spoke about the Child to all who were awaiting the redemption of Jerusalem. When (Joseph and Mary) had fulfilled all the prescriptions of the law of the Lord, they returned to Galilee, to their own town of Nazareth. The Child grew and became strong, filled with wisdom; and the favor of God was upon Him."

In the Fourth Joyful Mystery, "Jesus’ circumcision, on the eighth day after His birth, is the sign of His incorporation into Abraham’s descendants, into the people of the covenant. It is the sign of His submission to the Law." (Article 527 of the Catechism of the Catholic Church).

Contemplate the Presentation in the Temple during a short period of silence, then recite the following prayers:

While holding the single bead beside the next group of 10, pray the 'Lord's Prayer' : 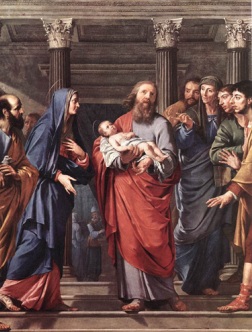 On the next bead (first in the group of 10), pray the 'Hail Mary' :
Hail Mary, full of grace,
the Lord is with thee!
Blessed art thou among women,
and blessed is the fruit of thy womb,
Jesus.
Holy Mary, mother of God,
pray for us sinners now, and at the hour of our death, Amen.
Repeat the 'Hail Mary' 9 more times, for each remaining bead in the group of 10 (the 'decade').

Next, pray the 'Glory Be' :
Glory be to the Father, and to the Son, and to the Holy Spirit!
As it was in the beginning, is now, and ever shall be,
world without end, Amen.

Next, pray the 'Fatima Prayer' :
O my Jesus, forgive us (our sins), save us from the fires of Hell!
Lead all souls to Heaven, especially those in most need of Thy mercy, Amen.

This concludes the Fourth Joyful Mystery. Now you may proceed to the:

closing prayers (if you are praying only the Fourth Joyful Mystery) 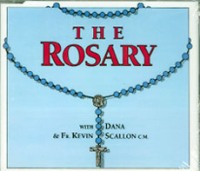 The video below pairs classical art
images, with an audio track from "The
Rosary" CD/tape by Dana and Father
Kevin Scallon (pictured left).
Beautiful music and a brief meditation
on the fourth Joyful Mystery, the
Presentation, accompany a prayerful
recitation of the decade of prayers.

To play the video below, click on it
twice.