The next great ambassador of the Holy Rosary was St. Louis de
Montfort, who lived at the turn of the 18th century and whose
name is still familiar today. Although this French Jesuit priest
lived a short 43 years, he was recognized even in his own time
as a powerful preacher and saint, enormously influential in reviving popular devotion to the Holy Rosary. A gifted speaker of irreproachable virtue, humility and constant prayer, Montfort’s love of Our Lord, the Eucharist, the Cross, and a deep devotion to the Blessed Mother and her Holy Rosary, enabled him to bring even the most hardened of sinners to tearful repentance, and multitudes back to the Church. According to Montfort, ‘there is nothing more powerful in bringing Divine Wisdom down into us, than the welding of mental and vocal prayers in the Rosary, uttering the prayers and meditating on the Mysteries. Saying the Rosary is the best way of praising Jesus in Mary – and through Mary'. 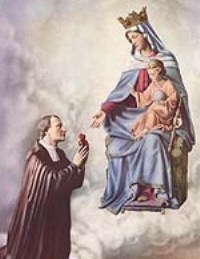 Having consecrated himself to Jesus
through His and Our Blessed Mother, Montfort preached this method of sanctification to others, and explained it in his two Marian masterpieces – the books True Devotion to the Blessed Virgin (also available today under the title True Devotion to Mary) and The Secret of the Rosary - both international bestsellers.
(This latter book is available for free when you place a rosary order from this website!) This saint also founded two congregations - the ‘Sisters of Wisdom’, who taught disadvantaged girls and worked in hospitals, and the ‘Company of Mary’, comprised of missionaries.

Of course, a man this holy was not without enemies. The Jansenists of his day - who opposed any devotion to the Blessed Virgin, as contrary to the devotion due the Trinity - persuaded a Bishop to expel the preacher from his diocese, but this was soon reversed by the Pope, who granted him permission to preach freely throughout all of France. Some even tried to kill Montfort by poisoning the broth he drank after a sermon - which despite immediate treatment, resulted in seriously compromising his health for the rest of his days. The saint escaped another assassination attempt by enemies waiting for him to pass along a certain road, when a premonition of danger prompted him to travel a different route.

Also worth noting is St. Louis de Montfort’s project in which he oversaw the building of an outdoor, arboreal rosary (a rosary of trees!) in 1709. Up to four hundred locals enthusiastically volunteered in the planting of 15 Cypress trees – for the ‘Our Fathers’ – and 150 fir trees – for the ‘Hail Marys’, culminating in a reproduction of the Cross of Calvary on top of a hill. On the day it was to be blessed, the bishop intervened and forbade it, and this was followed by an order from the Governor to demolish it, due also to the influence of Jansenists. Montfort reportedly greeted the humiliating news with a joyful ‘Blessed be God’! Then, in 1821, the ‘Montfort Fathers’ resurrected this arboreal rosary, which has stood as a shrine visited by pilgrims from all over France and the world.