The Psalter of David & Paternoster Beads

The most popular of all Catholic devotions, the Rosary has its earliest origins in the Jewish ‘Psalter of David’, the 150 psalms of King David which make up the Bible’s Book of Psalms. Dating from the Early Middle Ages (4th to 11th centuries), Christians in consecrated religious life would recite up to all 150 psalms of the Bible as part of the ‘Divine Office’ (proscribed daily prayers). A well-known example were the 7th century Irish monks, who counted the psalms on knotted cords.

Throughout these times, when bibles were costly and rare and most people were illiterate, devout lay people wanting to somehow share in this devotion of praying the psalms substituted a series of recited or chanted 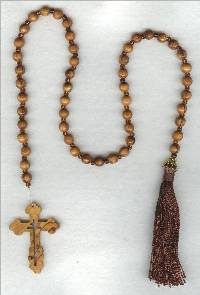 'Our Fathers' - one for each psalm.
The knotted, and later beaded strings
used by lay people to count their
prayers were called ‘Paternosters’
(Latin for ‘Our Fathers’).

To this day, there is a street in
London England called 'Paternoster
Row’, where craftsmen made and sold
the popular prayer beads!

What came after Paternoster beads? Continue here with the history of the Christian Rosary.