The spiritual FRUIT of praying the First Glorious Mystery is FAITH.

An audio-video presentation of Christ's Resurrection
appears at the end of this page.

A Scriptural Rosary version for this
decade is available here.
(Page can take a moment to load, and
text may appear further down page!)

The Resurrection of Christ – John, chapter 20:
On the first day of the week, Mary of Magdala came to the tomb early in the morning, while it was still dark, and saw the stone removed from the tomb. So she ran and went to Simon Peter and to the other disciple whom Jesus loved, and told them, "They have taken the Lord from the tomb, and we don't know where they put him." So Peter and the other disciple went out and came to the tomb. They both ran, but the other disciple ran faster than Peter and arrived at the tomb first; he bent down and saw the burial cloths there, but did not go in. When Simon Peter arrived after him, he went into the tomb and saw the burial cloths there, and the cloth that had covered his head, not with the burial cloths but rolled up in a separate place. Then the other disciple also went in, the one who had arrived at the tomb first, and he saw and believed. For they did not yet understand the scripture that he had to rise from the dead. Then the disciples returned home. But Mary stayed outside the tomb weeping. And as she wept, she bent over into the tomb and saw two angels in white sitting there, one at the head and one at the feet where the body of Jesus had been. And they said to her, "Woman, why are you weeping?" She said to them, "They have taken my Lord, and I don't know where they laid him." When she had said this, she turned around and saw Jesus there, but did not know it was Jesus. Jesus said to her, "Woman, why are you weeping? Whom are you looking for?" She thought it was the gardener and said to him, "Sir, if you carried him away, tell me where you laid him, and I will take him." Jesus said to her, "Mary!" She turned and said to him in Hebrew, "Rabbouni," which means Teacher. Jesus said to her, "Stop holding on to me, for I have not yet ascended to the Father. But go to my brothers and tell them, 'I am going to my Father and your Father, to my God and your God.'" Mary of Magdala went and announced to the disciples, "I have seen the Lord," and what he told her. On the evening of that first day of the week, when the doors were locked, where the disciples were, for fear of the Jews, Jesus came and stood in their midst and said to them, "Peace be with you." When he had said this, he showed them his hands and his side. The disciples rejoiced when they saw the Lord. (Jesus) said to them again, "Peace be with you. As the Father has sent me, so I send you." And when he had said this, he breathed on them and said to them, "Receive the holy Spirit. Whose sins you forgive are forgiven them, and whose sins you retain are retained." Thomas, called Didymus, one of the Twelve, was not with them when Jesus came. So the other disciples said to him, "We have seen the Lord." But he said to them, "Unless I see the mark of the nails in his hands and put my finger into the nailmarks and put my hand into his side, I will not believe." Now a week later his disciples were again inside and Thomas was with them. Jesus came, although the doors were locked, and stood in their midst and said, "Peace be with you." Then he said to Thomas, "Put your finger here and see my hands, and bring your hand and put it into my side, and do not be unbelieving, but believe." Thomas answered and said to him, "My Lord and my God!" Jesus said to him, "Have you come to believe because you have seen me? Blessed are those who have not seen and have believed." Now Jesus did many other signs in the presence of (his) disciples that are not written in this book. But these are written that you may (come to) believe that Jesus is the Messiah, the Son of God, and that through this belief you may have life in his name.".

In the First Glorious Mystery, “ 'If Christ had not been raised, then our preaching is in vain and your faith is in vain' (1 Corinthians 15:14). The Resurrection above all, constitutes the confirmation of all Christ's works and teachings".
(Article 651 of the Catechism of the Catholic Church).

Contemplate the Resurrection of Jesus during a short period of silence, then recite the following prayers:

While holding the single bead next to the metal centerpiece of your rosary beads, pray the 'Lord's Prayer' : 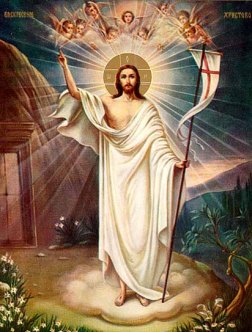 On the next bead (first in the group of 10), pray the 'Hail Mary' :
Hail Mary, full of grace,
the Lord is with thee!
Blessed art thou among women,
and blessed is the fruit of thy womb,
Jesus.
Holy Mary, mother of God,
pray for us sinners now, and at the hour of our death, Amen.
Repeat the 'Hail Mary' 9 more times, for each remaining bead in the group of 10 (the 'decade').

Next, pray the 'Glory Be' :
Glory be to the Father, and to the Son, and to the Holy Spirit!
As it was in the beginning, is now, and ever shall be,
world without end, Amen.

Next, pray the 'Fatima Prayer' :
O my Jesus, forgive us (our sins), save us from the fires of Hell!
Lead all souls to Heaven, especially those in most need of Thy mercy, Amen.

This concludes the First Glorious Mystery. Now you may proceed to the:

closing prayers (if you are praying only the First Glorious Mystery)

The video below features a recitation of the first part of the Rosary, followed by the First Glorious Mystery, the Resurrection, then the recited decade of prayers. It is also accompanied by soft background music and scrolling scripture passages. To play the video below, click on it twice.